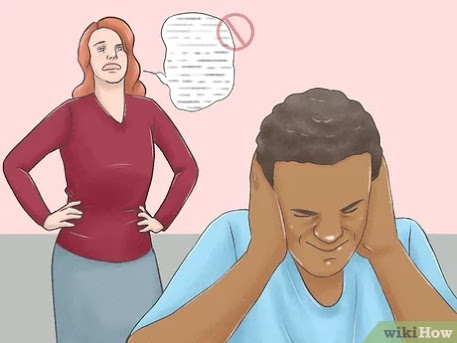 One of the most common complaints I hear from women is that men don’t listen  Be it at work where their good ideas are ignored, or at home when their spouse totally forgets what she told him. Why can’t men listen? They can, once you learn how to talk to men the right way.

So the next time you want to talk to your male boss, be heard in a meeting, discuss an issue with your spouse, or connect with your teenage son, remember that there are certain ways to teach men how to listen — and it all starts with your approach.

Men don’t hear as well as women. Honestly. It starts at birth and continues through life.

This was first proven through studies in neonatal clinics where researchers thought playing soft background music might calm premature infants, enabling them to eat more and gain weight faster. The results showed a major improvement for females and no improvement for males. Further studies showed this because the little boys did not hear as well.

This hearing difference continues through life. It explains why a woman may feel her boss or coworker or husband is yelling at her when he thinks he isn’t or why teenage boys (and men) love loud music, surround sound, synthesizers, etc and you women run from the room in pain.

Bottom line, if you want to know how to talk to men, you have to understand that men don’t hear as well as women — so speak up if you want a man to hear you.

Ladies, if you were ever in a relationship or married, you know all too well how men are an expert when it comes to not paying attention and all you can do is look for ways to get him to listen.

We may not even be sure why they do it but they do it very well. How many times did you ask him to put his clothes in the hamper? Or have you tried talking to him about your feelings? What’s your biggest frustration when you are talking to your boyfriend or husband?

You all have all been in this situation and just want to know the proven ways to get him to listen – and I mean to actually listen and understand what we are talking about! We’ve heard you, so to make us listen , you need to follow the process. It’s not that hard.

When you’re sharing your day or a genuine crisis, is your man’s response, “What’s that, honey?” .
Yelling at him won’t help him be a better listener. But these talking tips from relationship experts will…You have so much to share with your man – from your boss’s latest passive-aggressive move to the funny things your girlfriend said. But your partner’s eyes desperately dart from your face to the game on TV.
(((We love our footballs and crickets, hockey, etc. We don’t say it but we really want you to SHUT THE FUCK UP then))).
He’s just not listening. Let’s face it. You expect your partners to listen like girlfriends do. But that’s never going to happen. Not because men don’t want to, but because they respond to different cues than women are programmed to provide.“Seemingly senseless misunderstandings … can in part be explained by the different conversational rules by which men and women play”.

” Georgetown linguistics professor and communication specialist Deborah Tannen points out in her article, “Can’t We Talk?”“Learning about different conversational frequencies [between the genders] can banish blame and help us truly talk to one another,” she says. How do we do that? By learning a few simple talking tips to bridge that gender gap.  Have you ever talked to your friends about “how my boyfriend doesn’t listen to me when I talk?” Why are men in general like this?

Do they have a man-code about it? Are there ways to get him to listen? Well, before we dive into the secrets, we must first understand why they are like this.

It’s a fact. Men, in general don’t like long boring talks especially about what happened in the grocery store, how you like to repaint the kitchen, how you saw this bargain, and even how you feel sad and neglected. Let me put some pointers for you :

1) Stop Expecting him to Agree:
When you started dating, your guy was a great listener. But then came that day he sided with your boss… and you tore him to bits. That’s because women think that agreement is a show of support, while men often like to play devil’s advocate.
If he thinks you just want him to agree, he won’t have any incentive to listen. Nobody likes suppressing their honest opinions or feeling compelled to agree with someone they think is wrong. Before you resent him by saying that “my boyfriend doesn’t listen to my feelings” anymore, maybe you should reassess everything first. Recently, one of my female friends who wanted to discuss something called me . I gave her an honest opinion and in return, the response was,”I will never call you again for any advice. You have put so many negative thoughts in my head”. Whereas, I was being honest and kept my opinion and said what she did not want to hear. The Truth! .

Instead of getting frustrated with your boyfriend or spouse and bursting out – why not go ahead and understand them? You’d see how easy it is to reach out to men. Simple really. Stick to the subject. Keep it simple and summarize it if needed. If you want to have a night out with him, then just say so.

Don’t go telling stories like how your friend and her boyfriend are having a trip or you’re tired and maybe someday you can also have time together etc. This is a boring topic for a man so if you want him to listen – be straight to the point but still sensitive. Tell your partner you want to hear what he thinks – and that you’ll listen this time without criticism.

Accept that sometimes, you just won’t share the same opinion. And because it may not come naturally to him, let him know that there are other times – like after a fight with your boss – when you really just want to know he’s on your side. Then do it. If you find yourself biting your tongue or wanting to argue, fight the urge. Also, focus on what your man’s opinion reveals about him. If you listen this way, you’ll hear what’s behind that opinion – like his commitments, passions, integrity and dreams.
I used to take some hard decisions with my ex-wife and all had a deep, very thoughtful, calculated call in my head. Instead of listening to my side, all she used to do was give the silent treatment, and behave like the alpha narcissistic biatch and I would end up losing the entire plot.
Anyway, let’s, stick to the subject. If you want to know more, read the other articles.

Remember that he is interested in how you feel and what you have to say – but since you’re coming to him for advice, he cares more about how to help you solve the problem than he does about hearing every detail of it. If you notice him growing impatient, try keeping your comments clear and direct, focusing on the essential points.

Then, share the facts – limiting your story to two or three minutes. Pause, ask for his thoughts, and wait. Changing your conversation style takes discipline, say all the experts. But this way, you won’t lose him to the swirling pool of TMI (too much information).
Grab the chance of him listening to you but don’t bore him. Have the ability to see if he’s really bored because if you don’t? He will just doze off into the conversation and we’re back to square one.
2) Get their Attention but mostly Wait for it, He Loves you :

He’s impressed. He must be: He’s with you. But feminism did something strange to love and dating: It got women talking about the stuff we do . Men spend their whole lives jockeying with other guys for status and respect. He doesn’t want to have to compete with you too.

So let him know when things are going well, but try not to brag too much about your new Birkin Bag or finishing your first triathlon.“It’s impressive … but it’s not getting you, love,”.  Men are programmed to woo women with their accomplishments, not the other way around. Men need to feel like they’re providing, that they fall in love with your quirks – not your trophy wall. And while lots of men are proud of their high-achieving partners, others are still intimidated by an accomplished woman.

A genuine man will be super proud of his lover for achieving more than him and reaching new heights. But bragging about them can put any loving man in a little complicated place. He still needs to be respected as, “The Man of the House” and in charge of it. Taking that away from him can hurt a man and also remember that he has friends. Nobody wants to look weak in front of them. You earning more and giving him the credit to support you wherever you go and keeping him where he should be will get you love,care and affection .

He won’t be able to be the all-understanding husband instantly. Everything needs some time so being patient with him will also allow him to feel more comfortable with you so he can talk and share as well. He too has dreams, he too has desires. When you have achieved your goal, help him reach to his and you are looking at a power couple. Modern feminism teaches you to be happy and lead a life without giving a damn about the traditional ways. But please remember, a relationship between a man and woman goes back millions of years. Feminism has just started in comparison and is still not even close to it in popularity.  Stop questioning it!

I have actually seen women win over a man to her way of thinking but then keep the discussion going.

This can bring a new point to the table that causes the man to re-think and change his opinion.  When you have made your point and everyone agrees with you, stop. You want him to keep falling in Love. Not maintain the standard.  He Loves you and is proud.  Do what you do. Stay your amazing self. And at home, make sure you let him know you think he’s amazing too.

You can be masculine in the office. But in a romantic situation, be the feminine energy and have him protect you. Remember that a conversation goes two ways. Slow down, edit yourself and ask for feedback. If you want your partner’s help solving a problem, be direct. Ask questions, and give him a chance to contribute, or he’ll start tuning you out.
ENOUGH NOW. STOP TALKING  !!.