The consequences of the American killing of a top Iranian Maj. general made the things worse in the Middle East and beyond on Sunday, with Iran all but abandoning a nuclear agreement as well. However, an American-led coalition in Iraq and Syria suspended the campaign it has waged against the Islamic State for years, as plenty of thousands of Iranians took to the street to join protest for the general, Qassim Suleimani.

“Iran’s nuclear program will have no limitations in production, including enrichment capacity,” the Iranian government said in an announcement Sunday.

Mr Trump also channelised his anger at Iraq, saying to not expel American forces there. “We’re not leaving unless they pay us back for it,” he said. 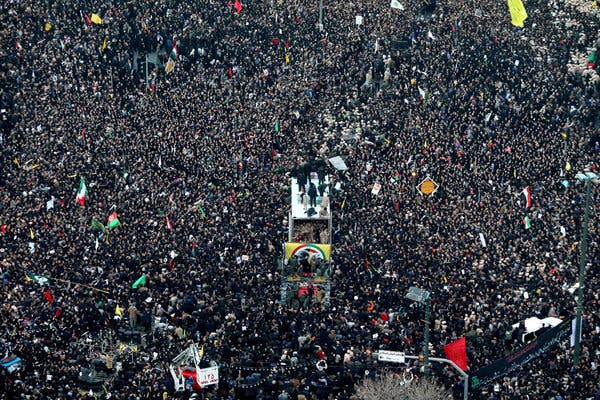 General Suleimani was an important figure both in Iran and across the Middle East. Since he was killed in an American drone strike at the Baghdad airport on Friday along with a powerful Iraqi militia leader, Iran and its partners have started protesting.

Mr Trump also warned Iraq on Sunday. “We have a very extraordinarily expensive air base that’s there,” he said. “It cost billions of dollars to build, long before my time.”

“If they do ask us to leave,” he added, “if we don’t do it in a very friendly basis, we will charge them sanctions like they’ve never seen before ever. It’ll make Iranian sanctions look somewhat tame.”

“Like ISIS, Like Hitler, Like Genghis!” Mr. Jahromi said on Twitter. ”They all hate cultures. Trump is a terrorist in a suit. He will learn history very soon that NOBODY can defeat ‘the Great Iranian Nation & Culture.”

He was asked in an interview with the BBC whether the killing was legal or not, Mr. Raab said, “There is a right of self-defense.” He said he did not agree that the killing was an act of war, and described General Suleimani to Sky News, another British broadcaster, as a “regional menace.”

Quotes to Beat Your Stage Fear

4 Ways to Overcome Your Fears

How to Study Online Effectively