Home » Boyfriend » When the Narc. wants you to Leave

When the Narc. wants you to Leave 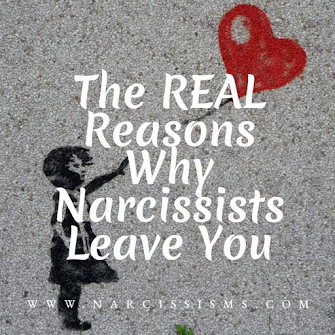 The Narc. Will do absolutely anything to make you leave. This article is basically for anyone who is in a narcissistic relationship or actually dealt with one. It’s very important that the world is educated on this subject. And I am just trying to do my bit. Even if 1 soul gets some benefit from my experience, I will be happy. Nobody deserves to go through such abuse.

When you are in this relationship, sometimes the narc. does find out that you have seen the real face. The face behind all the façade. The real entity. But they don’t have the guts themselves to end it. In such cases, they purposely stay in these relationships. Not to save it but make you do it. They will purposely make it a living hell for you. They will start doing all those things you hate. They will increase the abuse by 10 times. Be it gaslighting, manipulating, lies, all these types of things. The emotional, mental and in some cases even physical abuse increases tremendously. The narc. even if they want to get out of the relationship actually enjoy chaos.
This actually is a trigger fun moment for them. They love and literally feed on chaos than actually face a divorce. Until you make it to court they will not. They do not want to face the attorneys, court system because their image will get hurt. Because if the truth comes out, everyone will find out and say, they messed up their marriage, or they failed at it. Narc. always keep everything to maintain image and ego. They will show the world outside that everything is hunky-dory. How beautiful a couple they are and doing everything to make ends meet. But on the inside, it’s the complete opposite. You face harassment, silent treatment, mental abuse, etc. Therefore, the narc. will always work on a plan to save their image.
Be it changing houses, hiding things from colleagues, discarding mutual friends, etc. Being Fake with a gigantic ego is all they have. And the best way for that to happen is to make you leave. Tell the world that it was you who wanted it. And with this thought, they start making your life absolute hell for you. Doing things to piss you off, degrading you, saying and doing hurtful things. This all is being done with one and one agenda only.
The point is to make you so frustrated and annoyed that you lash out.
The narcissist wants that other person to leave for a couple of reasons :
1) Narc. is not strong enough to leave on its own. Whether that’s mentally or emotionally not strong enough. They want you to leave because they will feel strong enough mentally and in control as they made you do it.
2) The other reason they want to force you out and make you the decision is that they want to look like a victim. They want to gain sympathy and most importantly twist the story however they want. Feeling victims and showing how much hurt they are going through will help them cover the real truth. Even at the end they will try and show the world that yes they tried. They tried talking to you and your family. They did everything possible but the words, gestures they did during the so-called peace talks were completely opposite. Asking the question again and again,” so you want to end it?”.
This is because they want you to say it and get put all the blame on your head. This is only because they can turn around and say,” look, I did all I could but he/she ain’t ready to work it out”. So, when you are in this fix should you do the opposite to just piss them off. Stay with them.
HELL NO ! . You need to leave. Let the blame come on you if need be. Because this one blame is for the world and it will eventually come out. Just pack your bags and run. Need to go no contact and block them from everywhere. Be very careful when you are dealing with such individuals. In my own relationships, it did happen. She knew that I was just not letting go. I was after her to work it out. But she made my life so miserable after she realized that I won’t take the first step that one day I actually had to. But thank god by then I had my therapy going and was literally guided step by step as how to walk out. I realized she is doing it because she can get what she wanted from the situation. Which is to party, go on these single girl nights, trips, maybe find a new resource and still not lose face. This will only happen when she can manipulate the story and become the victim.
Typically, they force you to leave because of a plan they made weeks maybe months ago. Maybe a new job may be a new destination they want to visit, might be another area they want to live. But mostly it’s because of the new person. They are getting tired of you. Tired of your old supply and they are focused on the new one. So simply gaslight, manipulate, degrade you and move to the new one with the story they can now make. For you, best is to let them leave. Work on yourself, become better and find positive people around you. You have escaped a nuclear blast. Live a happy life and try to forget the past.

How to be consistent in Relationships

How to Make a Man Listen

When you should leave your NARC. partner

Signs You have a Real Bond with Your Partner

4 Practical Tips to Wake Up Early In The Morning

3 Worst Conditions in a Relationship

3 Ways to Cope Up With Failure

3 Tips to Move On After a Breakup